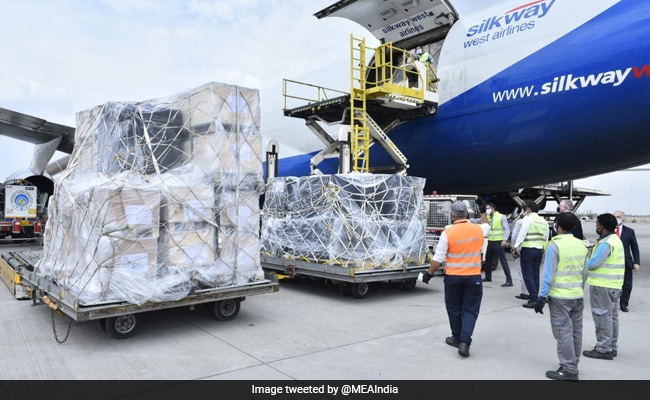 Ministry of External Affairs said it is grateful to Ireland, a European Union member, for the support.

A shipment carrying two oxygen generators, 548 oxygen concentrators, 365 ventilators and other medical equipment arrived in Delhi on Tuesday from Ireland to provide support India’s fight against the second COVID-19 surge.

According to the Ministry of External Affairs, it is the second shipment of medical aid from Ireland. The ministry said it is grateful to Ireland, a European Union member, for the support which will help add to India’s oxygen capacities.

A few days back, the first shipment from Ireland containing 700 units of oxygen concentrators and 365 ventilators arrived in Delhi.

The worsening COVID-19 situation in India has seen a surge in the demand for medical oxygen and beds for the COVID-19 patients.

Several countries around the world have come forward to help India as it continues to struggle with the increase in its health infrastructure needs caused by the rising coronavirus cases.

The member states of the European Union are delivering medical aid following India’s request for support.

The aid is being provided through the EU Civil Protection Mechanism, which is coordinated by the Emergency Response Coordination Centre of the European Commission.

Several countries like Romania, Italy, Germany, France and Belgium have already sent in the supplies.

Could Have Saved Many Lives With Door-To-Door Covid Vaccination: High Court

High Court directed the Centre to file an affidavit by May 19, when it would hear the matter further

The Bombay High Court today said if the Union government had started door-to-door vaccination programme for senior citizens a few months back, then lives of many of them, including prominent persons, could have been saved.

A division bench of Chief Justice Dipankar Datta and Justice GS Kulkarni asked the Union government why not pro- actively start this programme when the lives of senior citizens, who are unable to go to vaccination centres to get inoculated, are concerned.

The bench was hearing a public interest litigation filed by two lawyers Dhruti Kapadia and Kunal Tiwari seeking door-to-door vaccination facility for senior citizens above the age of 75, specially-abled persons and those who are bed-ridden or wheelchair-bound.

The court reiterated its earlier order of April 22 in which it asked the Union government to re-look at its decision to not initiate a door-to-door vaccination programme.

“It has been three weeks and the government (Union) is yet to inform us of its decision. The government should have taken a decision one way or the other,” the court said.

It directed the Union government to file an affidavit by May 19, when it would hear the matter further.

The court noted that many foreign countries have already started door-to-door vaccination facilities.

“In India, we do many things late and things travel to our country very slowly,” Justice Kulkarni said.

Why not start this (door-to-door vaccination) pro- actively when the lives of senior citizens are concerned? the court asked.

“Speaking off the cuff, if we had a door-to-door vaccination programme sometime back, then so many of our senior citizens, including prominent members of society from various walks of life, who have lost their lives to COVID-19, could have been saved,” Justice Kulkarni said.

The court further said it had seen photographs of senior citizens and many wheelchair-bound persons waiting outside vaccination centres in long queues.

“This was very heart-rending and not a good sight.

They must be already suffering from so many ailments and now they face the risk of being infected with COVID-19 also (while) waiting in such crowds,” the bench said.

The court noted that senior judges of the HC had a meeting with Birhanmumbai Municipal Commissioner Iqbal Chahal on Tuesday where he said the civic body was planning to start ward-wise vaccination camps from next week, which would have the capacity to inoculate 70,000 people per day.

“If such camps are starting, then maybe senior citizens and people who cannot step out of their homes can be identified and the staff can go to their homes and vaccinate them,” Chief Justice Datta suggested.

The bench directed the BMC to file an affidavit stating details of the same and by when it would begin and what steps the corporation plans to take for the next few days with regard to the vaccination programme.

The court noted that the availability of vaccines was also a problem.

To this, Additional Solicitor General Anil Singh told the court that the Covishield vaccine would be made available in a few days.

The court also sought to know from the civic body about what measures it plans to take for the vaccination of homeless people, beggars and those living on streets.

“They are also a significant population and are spreaders of the coronavirus, the high court said. 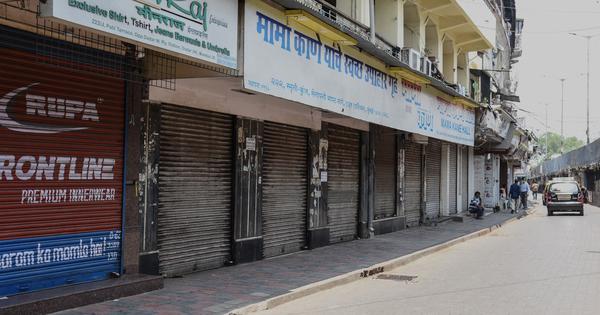 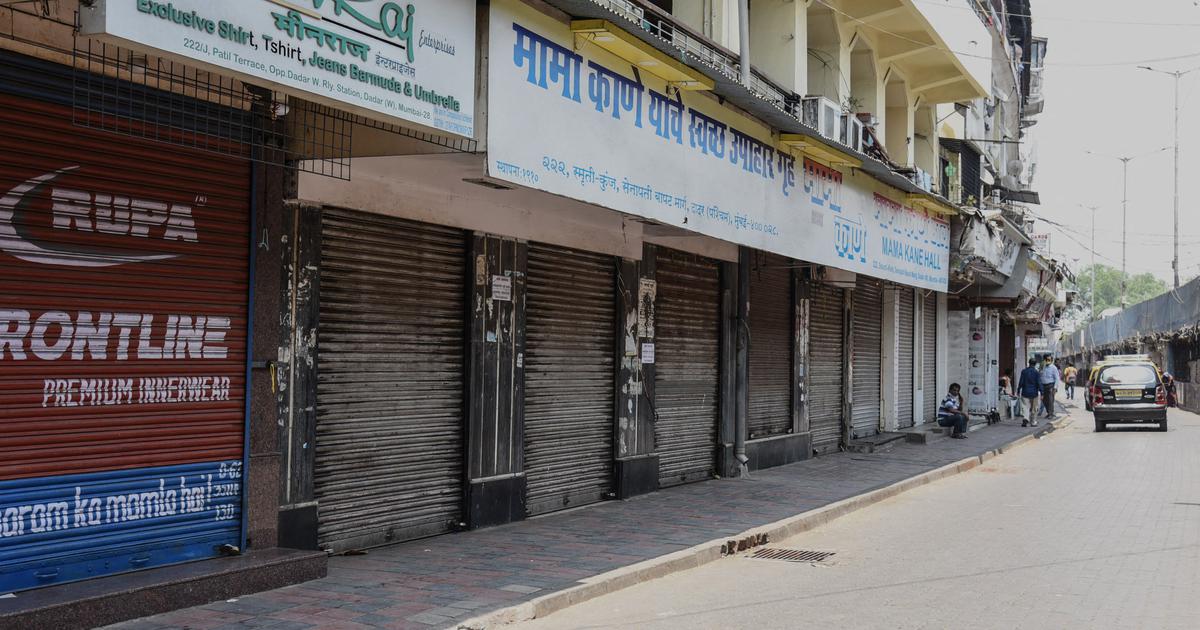 The Maharashtra Cabinet has recommended that the lockdown enforced in the state be extended by two weeks in view of the coronavirus situation, reported the Hindustan Times. The state has already extended the shutdown once, and the current restrictions will end at 7 am on May 15.

“At the Cabinet meeting, the health department and ministers proposed to extend the lockdown for 15 days,” state health minister Rajesh Tope told reporters. “The chief minister [Uddhav Thackeray] will take a final decision on this matter.”

As per the current rules, only those who provide essential services are allowed to travel in public transport. Government offices are working at 15% capacity, while marriage ceremonies have been restricted to 25 persons.

Authorities said they were not considering to impose other localised restrictions in districts that are reporting higher cases, according to reports. “Nearly 12 districts are showing a decline in cases, but that is just one-third of the state, the remaining two-thirds is either stable or is reporting an increase,” an unidentified official told Mumbai Mirror. “Opening up would lead to a surge again.”

Foreign Aid For Delhi Should Not Just Go To Hospitals Under Centre: Court

The Delhi High Court today told the Centre that when allocating foreign aid, in the form of medicines and equipment, for the national capital, the same should not just go to the hospitals and institutions managed by the central government.

A bench of Justices Vipin Sanghi and Rekha Palli said if aid was being given to the national capital, let the Delhi government distribute it.

“When you give to Delhi, you should look beyond institutions and hospitals being managed by the central government. The aid should go where it is most needed and can be most utilised.

“It should go where it serves the purpose for which it has come — for the benefit of COVID patients,” the bench said.

It also made it clear that if the situation was not remedied, it would not hesitate to pass appropriate orders.

“We do not want to stoop to this level of quibbling, but if this (distribution problem) continues we will pass orders,” the court added.

The central government claimed that the distribution of the aid was “targeted and equitable”.

It also said that initially the distribution was centralised, but now it was being sent to the states who decide to which institutions they want to give the aid.

The court said that till yesterday aid for Delhi was not being given to the government here for distribution and asked the Centre from when the situation has changed.

Even the amicus curiae — senior advocate Rajshekhar Rao — told the court that according to certain documents on record, the aid was going to institutions in Delhi and not the Delhi government.

The court directed the Centre to give a chart indicating how much aid has been sent to Delhi and to which institutions it has been distributed.

Some employees say no amount of precautions will make the workplace feel safe, survey says